Get rid of pests
immediately!

Do you have a pest problem? Call us: Coming Soon

During the summer the wasp population is at its peak. Despite the fact that people often find them troublesome animals, they do a good job for our natural ecosystem. They eat flies and mosquitoes and are an important link in the pollination of flowers and plants. During August and September in particular, wasps often want to cause nuisance, so in some cases it is almost impossible to sit outside properly.

Just like many animal species, there are different species of wasps. For example, one of the wasp species is the hornet. The hornet is easy to recognise, because it is a lot larger than the average wasp. On average a hornet is 3.5 to 4 centimetres. Because it also hunts spiders and bees, for example, it is popularly known as a killer wasp.

Hornet nuisance? These are the most important symptoms

The hornet may be considerably larger than an ordinary wasp, but this does not mean that it is also more aggressive. If you leave a hornet alone and do not make any wild movements, it will also leave you alone. The hornet will only become aggressive if it is cornered or if you get too close to the nest. A hornet can then sting and the poison that is released is comparable to a wasp sting. But because the horn string is bigger it can sting deeper. Because of this, the pain of a sting from a horn string will be experienced as much more painful.

The horn string prefers to build its nest in light forests and gardens. A birdcage or hollow tree will be a good place, because the nest is sheltered there. Shelter under roofs is also an ideal place for a horn string’s nest. If you have such a nest in your garden and also the terrace nearby, this will be a nuisance, because it can become aggressive. Fighting the horn string is then important. Since removing an entire nest can be dangerous, it is advisable to call in a professional pest controller to fight the hornet.

Where do hornets come from?

Winners are heard from almost the whole of Europe to, at most, southern Norway and Finland. They do not occur in large numbers in the Netherlands and Belgium, especially not in the coastal areas, but they are not a rarity in the rest of the country. In addition, the horn string has moved via Russia and Mongolia to China and even Japan. In North America, too, it is becoming increasingly common, but it does not naturally occur there. In the nineteenth century, it was dilated there. In the other continents it has not yet been spotted. 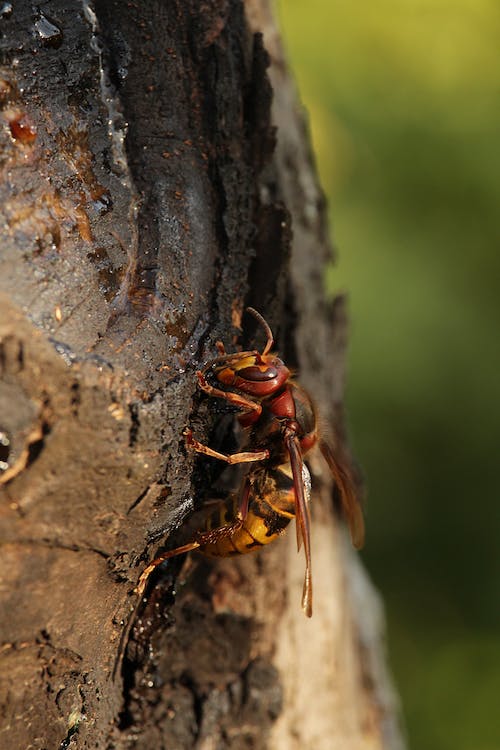 What not to do?

Many people have a tendency to beat around the bush at the sight of a hornet. So this is precisely what you should not do. The hornet will never prick on its own. If you move fiercely, it will feel threatened and become aggressive. The same applies if you have a nest in the garden. Especially when it hangs in a place where you don’t get around very much, leave the nest alone. If you come near the nest or even start touching it, you really are in trouble.

What can you do?

If you regularly have hearers around your terrace, you can build your own trap. Cut open a soft drink bottle and put the neck in the bottom of the bottle. You have now built a trap into which you put a filling that lures the horn string. Especially fruity drinks will attract the hornet. If you have a nest in the neighbourhood, it is important not to tinker with it yourself. You can easily fight the hornet by making a phone call to a fighter, who can expertly fight the hornet.

How can you prevent hearers?

Preventive measures to prevent hearers are virtually non-existent. Hearers like to build their nests in sheltered places. The only thing you could try then is to create as few sheltered spots as possible, but this is tricky. It is simply unavoidable that one day a hornet will fly by. Only when there is a nest in the neighbourhood, engage the fighter to fight the horn string.

1. We advise you not to fight the horn belt yourself, but to call in a specialist when you suffer from litter(s).
2. If you regularly suffer from flying horn-ears, you can make or buy a trap to catch these horn-ears. They will die in the traps.
3. Do not be afraid of one or two hearing winners. If you stay calm, they will stay calm.
4. If you want to try to fight a nest yourself, dress thickly so that no skin is visible and spray a lot of pesticide from a distance. However, it is not recommended to control the nest yourself.
5. If you are really bothered by a nest, please call a professional fighter. Only then can you be sure that you can fight hearing aids effectively and safely.